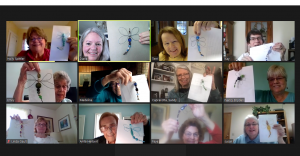 The Bradford Branch of AAUW created lovely dragonfly window decorations with the direction of Nancy Dryden. Members created two dragonflies in which one was to keep and one was to share.

Dryden explained that dragonflies were the first insect to inhabit the earth 300 million years ago in the Carboniferous Period. This is before the Triassic and Jurassic Periods. At that time the oxygen content of our atmosphere was 25 percent compared to today’s 21 percent. Scientists believe this contributed to it’s giant size with a wing span of up to 2 feet.

Dragonflies are symbolic of trasnformation, adaptablility, wisdom, clarity, lightness of being, self-realization, and living in the moment. The members are excited to share these creations with others. 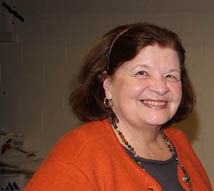 The American Association of University Women – Bradford Branch is proud to announce Lee Ann Doynow as the recipient of the AAUW Gateway to Equity Award 2020. This award recognizes individuals, groups or organizations that have shown, by action and philosophy, that they advance equity for women and girls through advocacy, education, philanthropy, or research.  AAUW – Bradford Branch recognizes Doynow for her lifetime commitment to advancing opportunities for women and girls through her leadership, advocacy and vision as a working professional and as a volunteer.

Doynow was born and raised in Bradford and received her bachelor’s degree in sociology from St. Bonaventure University. From 1973 to 1987, she served as the Executive Director of YWCAs in Bradford, Grand Rapids, Michigan, Buffalo, NY and the National Capital Area.  In each of her appointments, Doynow utilized her skills and expertise in strategic planning, fundraising, and human resources and fiscal management to reorganize and revitalize the organizations.  During her tenure at the YWCA in Bradford, she was the catalyst in the development of a residential program for transition from Warren State Hospital for women at the Bradford YWCA. Under her leadership, the YWCA developed its first resource center for victims of domestic violence and sexual assault and recruited of services for the first family planning clinic from the Family Planning Agency of Pittsburgh.

From 1989 to 2002, Doynow served as the Executive Director of the Allegheny Research and Development Center (ARDC) at the University of Pittsburgh at Bradford. Doynow and her staff worked to advance economic development in the region. After leaving the University, Doynow joined the Bradford Area School District as the human resources administrator until her retirement in 2008. She presently works as a private management consultant for non-profit agencies providing training in the areas of corporate training, executive recruitment, financial management, business development, and strategic management training.

When Doynow was informed of her award, she responded, “When I think about my past experiences, many amazing women who mentored me come to mind. We truly do stand on the shoulders of the women who come before us.” 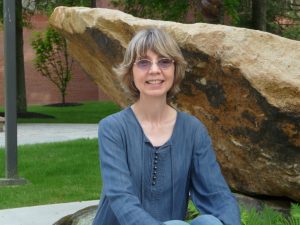 The recipient of the AAUW Outstanding Woman of the Year Award is Marietta Frank. This award is given to an AAUW – Bradford Branch member who has served the organization and community with distinction.

Frank received a bachelor’s degree in English at SUNY Geneseo. She also holds a Master’s degree in Library Science from SUNY Geneseo and a Master of Art in Children’s Literature from Hollins University. Frank currently serves as the Library Director of Hanley Library at the University of Pittsburgh at Bradford.  Prior to 1988, Frank worked at Xavier University in Cincinnati, Ohio and at school districts in Washburn, Maine and Salamanca, NY.

Frank has a specialty in children’s literature and has taught courses at the University of Pittsburgh at Bradford since 1991. She has co-authored three books, with two of the books focusing on science fiction in children’s literature. Active in her profession, Frank, has presented programs throughout the US and in France and Turkey.

Frank recently completed her term as President of AAUW and also serves as Historian for the organization. As a member of the Friends of Hanley Library, she works to strengthen the bonds between Hanley Library and the Bradford community. Frank is also a member of the University of Pittsburgh at Bradford Arts Council. In 2010, Frank was honored to receive the University of Pittsburgh ULS Faculty Librarian Excellence Award.

Throughout her career, Frank has been a tireless advocate of the important role that libraries, books, travel and learning play in our lives.

The Bradford Branch of AAUW was founded in April 1921 and the first Outstanding Woman of the Year Award was presented to Mary Keller in 1980. 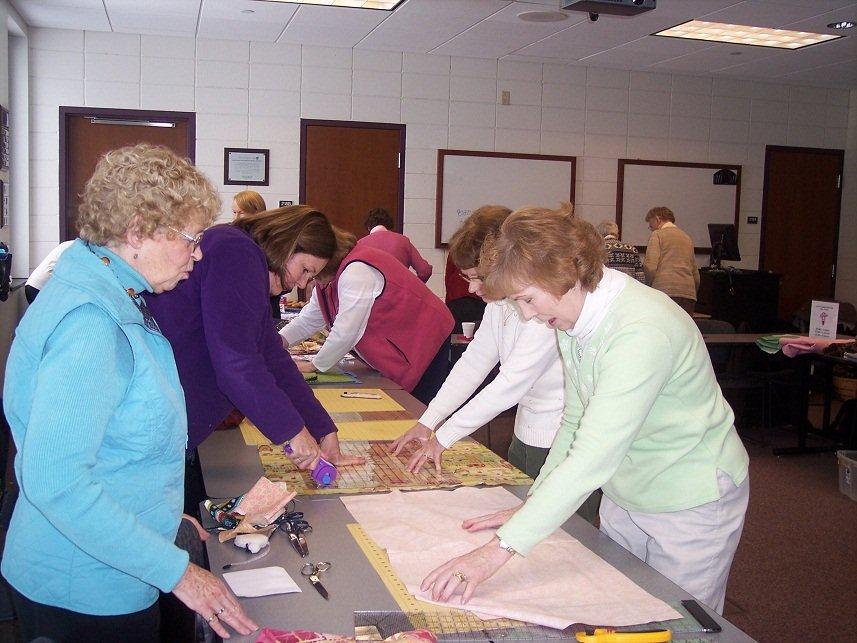 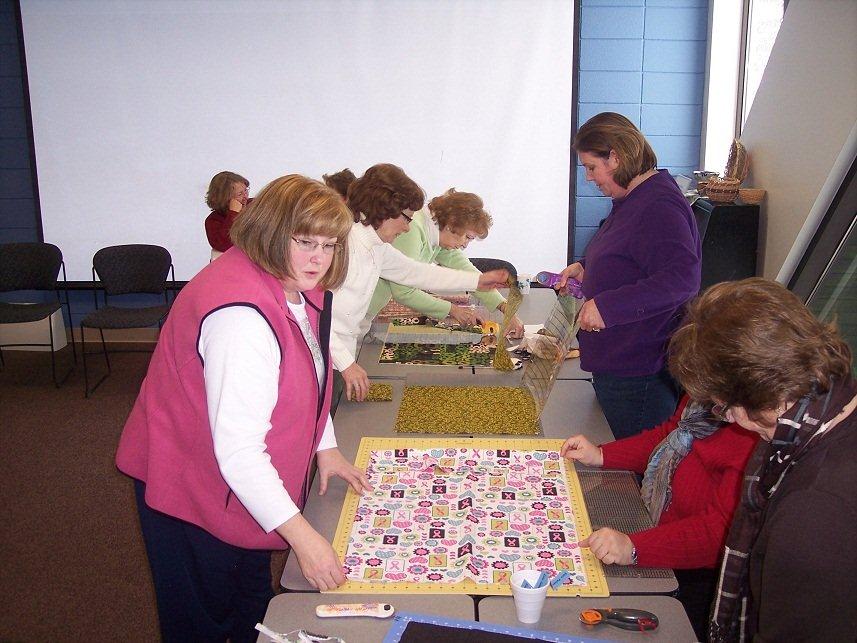 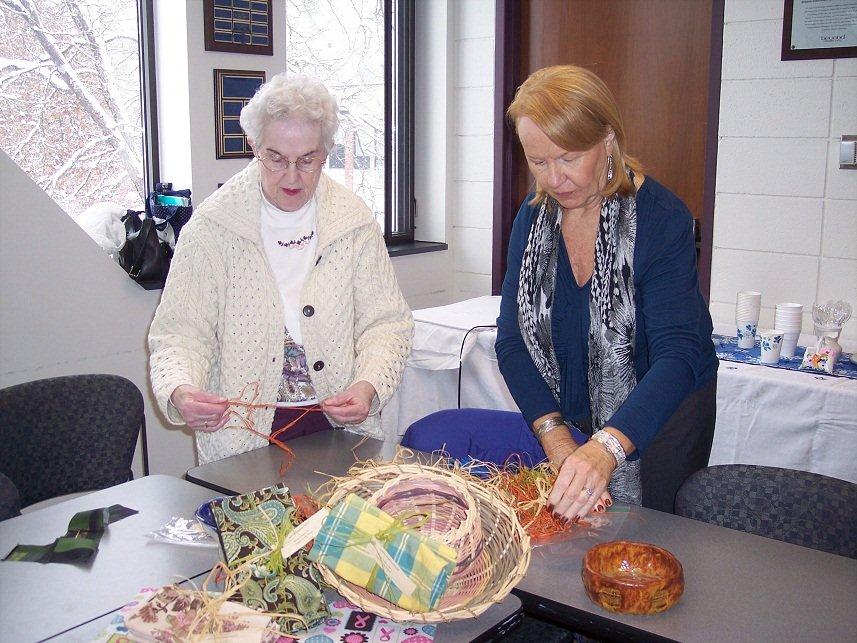 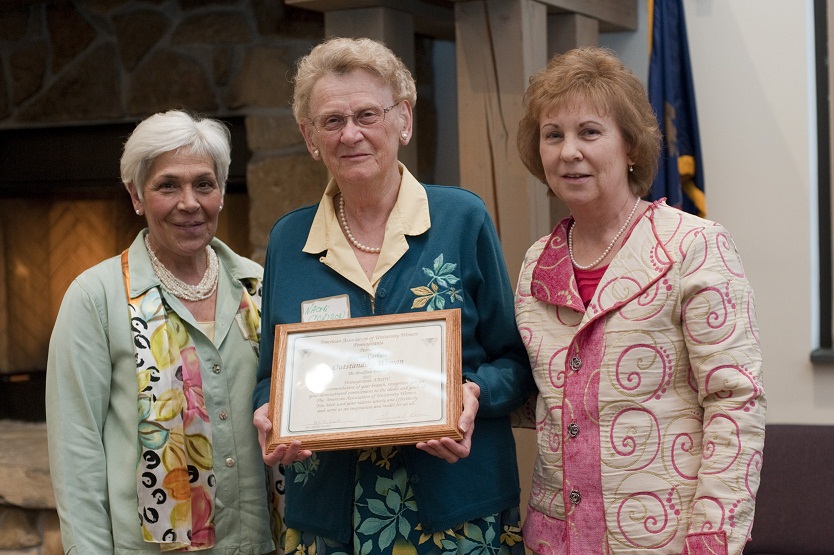